Refresh those stylesheets, folks. “Operation: My Last Design Was Okay But Ultimately Unsatisfying So Now I’m Starting Over” has wrapped. 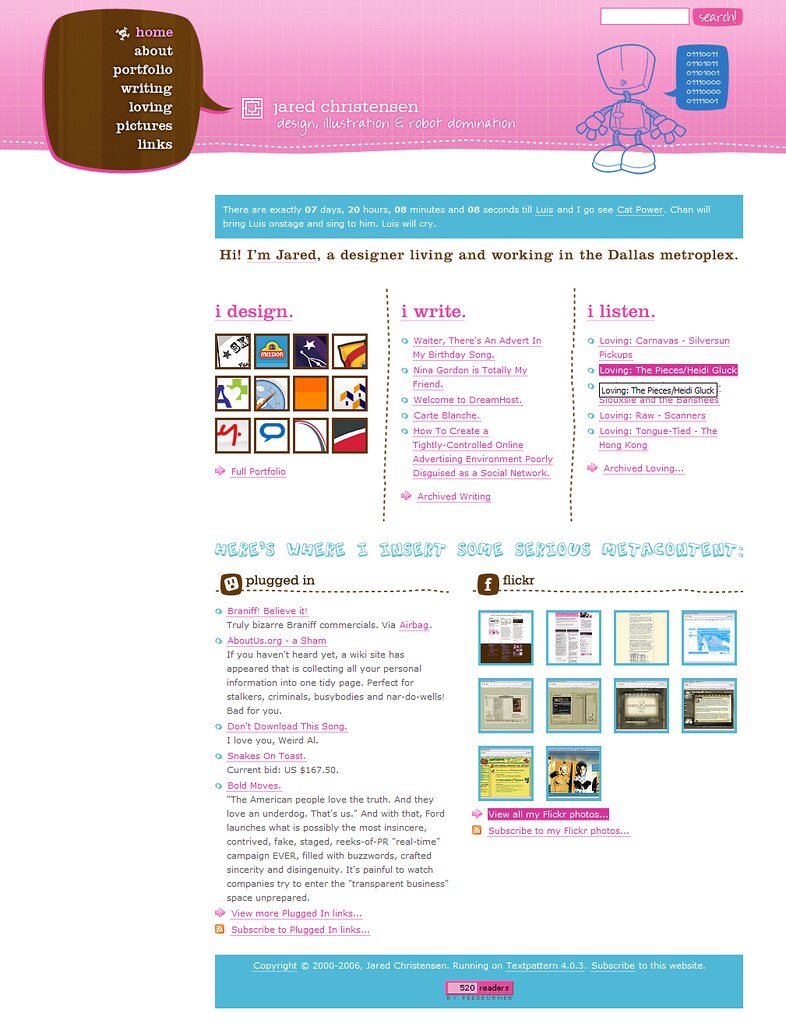 Design is fun. Sometimes it’s easy to forget that when you’re working inside a lot of constraints, so it’s vital to have a personal design space where you can paint the walls ochre, plant a ficus in the middle of the room and use your bathtub to brew root beer — if you want. The point is, expressing yourself is fun. Sometimes it doesn’t even make complete sense. There’s just a gut instinct, and you follow it. Sink or swim.

I wanted to get back to my illustration roots, and the fish just wasn’t doing it for me. That one spot of hand-drawn goodness seemed sequestered and alien, probably because, overall, I wasn’t seeing what I wanted. While there’s still only one hand-drawn graphic in this design (at present, that would be the robot), there are plenty of other typographic and design elements that bolster the doodle/sketchbook concept going on here. There was a lot that worked in the last design, and you’ll see some of that transitioned and adapted here.

So have a look around. I hope you come back often.

What do I win?

Haha, that was fast. All I can offer you is my respect and admiration for a) either being able to read binary or b) having the patience to type it into a translator. ;)

Looks rockin’ man. I have to say though, the icons do it for me.

Skippy RETURNS! Finally! Was wondering when you would finally bring him back :)

Funny, I also realised that design is fun during my recent blog redesign. Weird how one forgets such a thing. :)

I’ve decided that I hate you. I love this re-redesign. I love the illustrative elements. It’s organic and personal and quirky… and… and the use of pink is faboo. (starts to cry in her corner)

brilliant. really. I’ve always enjoyed your work, but this is leaps and bounds ahead of the chocolate version.

A totally (!) unrelated anecdote re ”[...] use your bathtub to brew root beer—if you want”, just because it popped into my head when I read that.

I used to play in a pretty cool band. When we split up, I lost track of the guys and it wasn’t until 14 years later that I ran into the guitarist again, who had turned into a total dope head, to boot.

I went to visit him and stayed at his place for a while, recording stuff and revisiting old times (he was and still is a great and very gifted guitarist). He was taking loving care of his dad (who had been incredibly mean to him when I knew the family more than a decade before), who was suffering from Alzheimer’s.

Anywho. He was growing pot in the bathtub. Lots of it. Upstairs. Safe from his dad, who couldn’t make it up the stairs if he tried (and didn’t know what the hell those plants were anyways).

While I was there, one morning, I heard this demented mewling sound coming from said bathroom. Apparently, in the middle of the night, when we were rockin’ the house in the basement studio, his dad had made it up the stairs and had taken a shower in that bathtub. For about three hours. To say that the weed farm had been hit by the Chinese water demon (and trampled underfoot) is an understatement.

I fell over backwards when I went into the bathroom, saw the devestated dope head, staring at the damage, with this incredibly sad and twisted face expression.

Now there’s someone who might have fared better if he had brewed root beer in the bathtub.

[Sorry for the intrusion. I’ll leave again. Feel free to delete this].

You’re sick. That’s probably not even long enough for Archive.org to save the Hot Chocolate design. On a side note, are your Plugged In links at all related to your del.icio.us links?

JJ – Archive.org has been useless for over a year now. They never picked up the pink design either. Someone needs to give them a kick in the pants. ;) Oh, and the Plugged In links and my del.icio.us links are separate things.

Volkher – Amazing what one phase will trigger in your mind, eh?

Josh – Skippy is back. Hide your women and clam chowder.

Glad everyone is digging the new paint.

Jared – Yeah, you should be happy I don’t comment here more often. I’m full of weird stories like that. Just keep the design and colors for a while and you’ll be safe.
;)

holy speechbubble! This design is so so so hot, i thought the other one was good but man, this takes the biscuit!

Looks great Jared! ...lots of personality in this design :)

I was a huge fan of your work before this redesign, and now I’m just in awe. Hot chocolate looked amazing, and sleek, but this has a lot more depth and feeling, and a personality.
A great great redesign. Congratulations.

When do you find time to eat or sleep, you bloody madman. Seriously though, this is one fantastic design. Any chance of leaving this one in place for more than two weeks?

Yes, hopefully now I will have time to “eat” and “sleep,” whatever those things are! ;)

Hey Jared,
I’m a developer from Ontario. I frequently visit your site (New design looks great). I’t has actually motivated me to start my own personal site. Keep up the good work. I’ll post a link to you on when I’m done!

Wow! Look at you! Two designs in three weeks. You really need some very well-structured CSS and markup here :)

When I first stumbled across Hot Chocolate it felt like totally being blown away. I was so into the three-column “Loving” page it felt so unique and a bit charming… I miss that on your new design, which still is awsome – of course. And I like your new frontpage better than the old!

So – really nice work! I love it! And please, don’t stop being creative and putting out awesome designs every few weeks! :)