This Is Where I Write The "Hey Internets, I Redesigned Teh Site" Post and You All Pretend To Be Excited.

Hard-refresh those browsers, kids. Version 15 of Jaredigital.com (snappy codename forthcoming) is alive and kicking. Somebody cue up The Breakfast Club soundtrack. 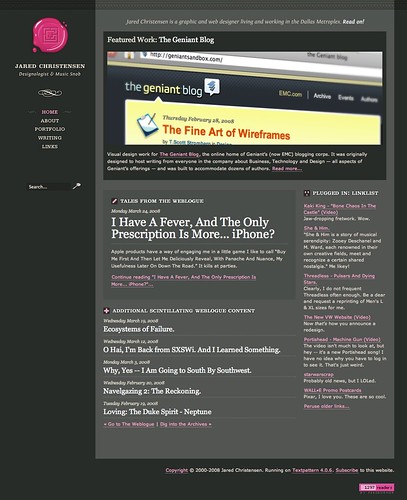 See, I’ve actually wanted to redesign for a couple of years, but both the time and the design “spark” eluded me as life continued to speed up. In classic ‘designer designs for himself’ form, everything I came up with was total garbage. To add another layer of self-imposed pressure, I became more and more fearful as time went on as to what kind of coding horror I might unleash upon the web, since I have not written a single line of code in roughly 2.5 years.

Something needed to be done, though. As much as I enjoyed my time with Trapper Keeper, my lengthening redesign cycles meant that if I somehow managed to design something that didn’t make me dry heave, I would have to reasonably expect that it would have to get a lot of things right. I wouldn’t get another chance anytime soon, if history was any indication. And with freelance work picking up a bit, there was extra incentive to present a more competent image.

Let’s Do Some Serious Navelgazing.

Trapper Keeper was pretty out there, and I got a lot of positive feedback about it over the years. It really represented a time in my life when I was learning and growing a whole lot, and really looking for a place to bust out of some of the professional constraints I was under.

This design, I think, is pretty representative of myself at present. It’s decidedly more classic and “grown up” looking. The Home page puts featured portfolio work front & center. Weblog content is more visually designed instead of just dumped out in a list. Stylistically, it represents how my current personal style has changed in 3 years. It eschews the “web 2.0 look”; no gradients, no dropshadows, no bubbly fonts, no comment count indicators, no cruft. It attempts to be classic and simple without being boring.

One of my goals for the new year has been to get back — and as uncomfortably close — to front-end coding as I possibly can, even if that means doing so on my own time. It was nice to get back into the swing of things, and hopefully I haven’t committed any grievous code sins. There are plenty of things to clean up still (IE6, you are at the bottom of my to-do list), but it feels pretty clean overall. No validation checks, plz.

I expect this design will be around for a good while, and I’m pretty satisfied with that idea. Thanks for indulging me.

The simplicity is the most appealing. Great job! I’m glad you kept some pink as well.

Hotness. I especially like the semantics: id=“tortilla” and id=“tostada”. Nice. :)

Jared, the new design looks fantastic, I love it.

One small note is that some areas on the site you have a slight color mismatch between what you’ve created in a graphics program and what you’ve defined through CSS. Most likely its simply a color-profile mismatch in Photoshop, i.e., try using Monitor RGB as your color profile when trying to match hex values.

I’ve uploaded an example where you can see it:

@Josh – Thanks! I emailed you as a follow-up to that issue.

Do love the new design. But I miss the robot. Definitely.

Boy! That’s a great one. I like the classy look!

You do realize that you have to get a wax seal ordered so you can gussy up some Designologist & Music Snob business cards…before SXSW.

You totally stole my “smooshed” wax insignia/seal aesthetic, thanks. Back to the drawing board I suppose! :) No, not really.. okay, maybe.

Your about page scares me though.

I loves it. Very classy and grownup-like.

Very nice, man. First the beard, now this. I think you’re getting much ‘older’. :D

Looks great Jared! I’m digging all the recent redesigns, with their really nice monochromatic feel and a little extra color (pink in your case) to make things pop.

Everything looks great! I like the preservation of the pink.

Nice & Simple, I like it. The subtle glow/shadow on the navigation text is a lovely touch.

Looks very nice (aside from this here comment form, but you’re probably working on that later, right?).

I fear I have to call you out though. You say, “no comment count indicators, no cruft” but on the home page you have your handy dandy feedburner stat counter. tsk, tsk. ;-)

As Mitch said above, the robot will be missed. That said, the image of you as Abe Lincoln more than makes up for it.

Great job on the redesign, Jared.

@Stickel – Busted! My ego couldn’t say goodbye to that counter.

Hey this is GREAT! I really like the color scheme and the choice of font. Very good layout. There are a couple of new-design-just-implemented bugs I’ve noticed. I’m in Safari to put things into context:

1. The search field button isn’t loading for me.
2. The labels for the fields here in the comment section are jumbling up making things a little funky.

*sings* Don’t you, Forget about me… NO NO NO NOOOOO *sings*

I’m liking the new design, super clean and un-complicated. It’s a good change but I will sorely miss Skippy *cries*

And yes, I still read your blog even though I haven’t IMed you in ages. Some of us still miss you around DIC. It’s a fact.