Despite the transitional nature of my life at the moment, I made time earlier this month for a site redesign. I hope by now you’ve noticed the change. It didn’t start out as a solid commitment, but when a pleasing design began to take shape, I signed myself up for the CSS Reboot. Truth be told, the signup was mostly meant to keep me from chickening out. And I almost did. Twice. 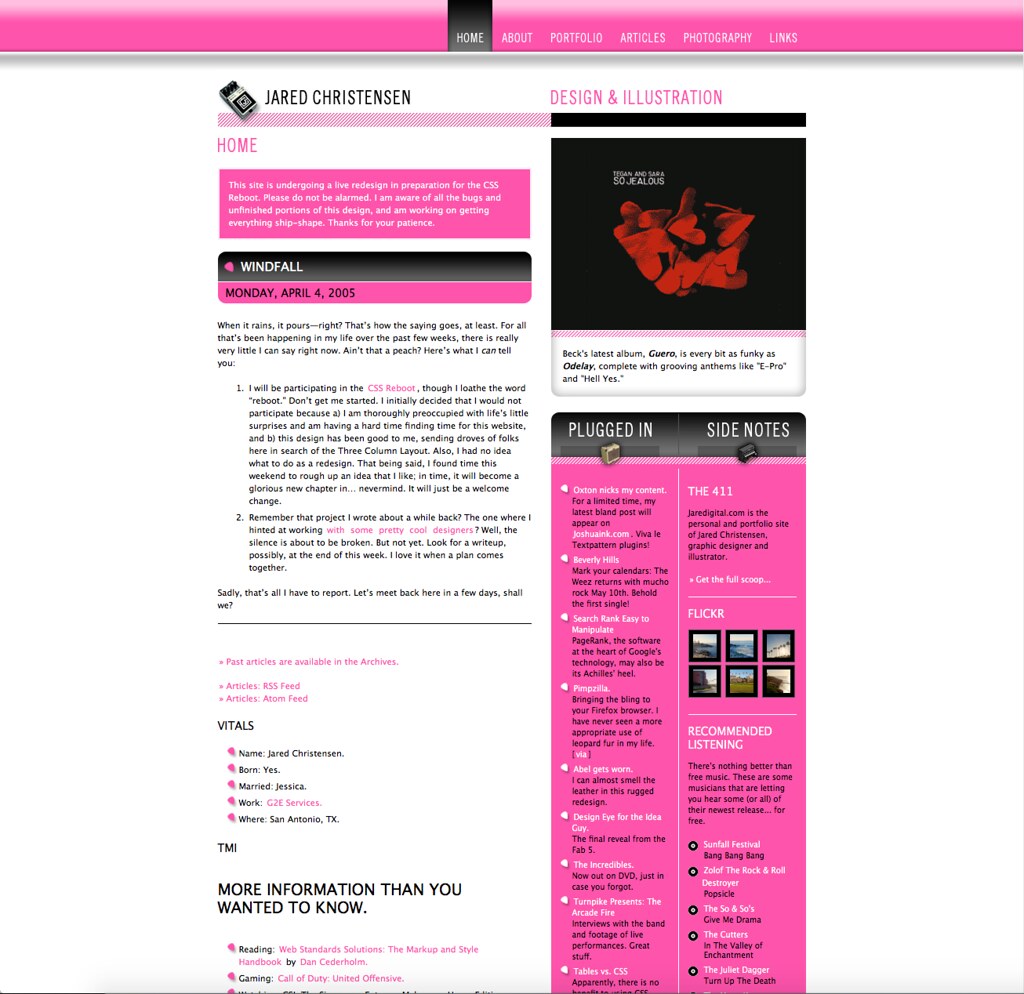 It all started with a rerun of Saturday Night Live. Actually, it all started with this jittery feeling in my gut the day I launched the Back in Black design. Historically, this website has been in a constant state of flux but considering the great feedback I got from Back in Black, I made a decision to “remove the flux capacitor” and keep that version around for a while. I love the Black design, but I’ve habitually changed and tinkered with this online palette since the day I bought it. Anyhow, back to SNL; the “comedy” sketches were questionably entertaining, as usual, but when I saw who the performers du jour were, I decided to stick it out.

You heard me. The impetus for the Pretty in Pink design came from Killers frontman Brandon Flowers’ pink leather jacket & black slacks ensemble. Very snappy. I’m not overly nostalgic for the 80’s, and it’s certainly nothing I’d wear to my local Chili’s, but there was just something appealing and decidedly retro about the color combination. All at once the design possibilities started flowing. Hot pink! New wave! Do you like Flock of Seagulls, you neo maxi zoom dweebies?

One part of the design that I’ve received a lot of feedback about is the “big nav.” Some people like it, and others think it’s — well — too big. The whole design actually began with the Big Nav. Yes, it’s bold. Yes, it’s garish. And yes, it is exactly the size it was meant to be. I felt that my old nav blended in a bit too much, and this time around I made it a point to really emphasize it. And with the bold “you are here” feature, it’s easier to know what page you’re on.

The music theme continues, and I don’t see it wearing me out anytime soon. This is, above all, my personal website and music still manages to be an influential part of my life. The familiar Plugged In and Side Notes icons return, hopefully running a thread between this design and the last. My favorite iconic addition this time around is the logomark on the stompbox. Originally the logo just sat beside my name — plain Jane style — but I think the stompbox really helps to cement the musical theme of the design.

Back to the Future.

There will no doubt be some adjustments made as the days go by, and I’ve very much appreciated both the positive and critical feedback I’ve received so far. Feel free to weigh in if you are so inclined. I consider every comment I get.

For a while, I was scared. I think it was more to do with my personal problems with pink though. I’m not really scared anymore. I like the nav. And I love the glossy effect on the black headers

Hey, don’t let anyone give you any guff on your big nav. You did what needed to be done from a design (problem solving) perspective. It simply works and works simply. Coolness.

No way! We all will give you a hard time about your big nav. That’s one of the enjoyable parts of design, is getting picked on by your peers (in a fun, educational way). ;)

Yes, the pink is a bit overwhelming at first, but it had taken some getting used to, and now I really like it. I’ve got to say though, the organization and structure of content came through rather well. I’m really digging this new look.

As I said when you launched this design, I think it is smooth, and dare I say it, HOT.

I am still out on the HUGE nav, I think no one can argue that it works superbly from a purely utalitarian angle… I am just not sure if I like how much it overpowers the rest of you design which is suprisingly subtle once you get past the serious vibrancy of the white > black > pink palette.

PS: I would personally prefer that there was no ‘preview’ button, and instead simply a ‘post’ button…

I adore the BIG navigation and the colours. Pink and black – you’re after my heart.

I think the nav and colors work well. But I always chuckle a bit when there’s feedback which use the word ‘like’ in it. In fact, the word ‘like’ should never be used by a designer…ever. (I’m being dramatic but you get the point)

How completely irrelevant is it for one deisgner to like or not like pink? The only real useful critique is a statement along the lines of ‘Given your intended message and the emotional impact you are trying to create…I don’t think pink is a good choice’. Of course we have no idea what the intended message or effect was, only you do.

In other words if this was a client site that needed this type of impact for it’s message, then I’d say you delivered 100%. Good work.

People are of course entitled to say what they like, I just think it’s like oil and water to speak of design in terms of ones’ personal preference.

I really like the site. In fact I like everything about it, NAV, Colour, evertyhing. Keep up the good work.

Does this site remind anyone of something?

Does this site remind anyone of something?

I see what you’re getting at, but that site has a style all its own. Looking sharp!

Pink is always HOT. Well done. Least someone dared to do a site with a colour most people wouldn’t deal with!. Good on you Jared! Dare I say again its HOT!

For those about to be inspired, I salute you.

This Is Where I Write The "Hey Internets, I Redesigned Teh Site" Post and You All Pretend To Be Excited.

Are We There Yet?

Do we bloom or decay?