The year was 1999. Predictably, the tired strains of Prince’s 1999 meandered through the air near my small studio apartment. It was New Year’s Eve, after all, and in just a few short minutes it was going to be the big 2000. The future. The year we’d all been waiting for. Jetpacks for all. I sat in front of my 100mhz Packard Bell desktop, waiting for the clock to roll past 11:59. I had backed up my important files on floppy disks and was presumably browsing the interweb to pass the time. Yes, I was a loner.

The clock struck midnight, and my computer entered the 21st century. My power didn’t go out. My banking history wasn’t demolished. My computer updated its clock and kept on truckin’. After nearly a year of sweaty panic, the world had dodged the Y2K bullet.

With the danger past, I began to once again consider purchasing a domain name and getting it hosted. I’d “honed” my table-building skills on such prestigious shared domains as Geocities, Yahoo!, Freeservers, Brinkster and Netfirms. Now it was time to get serious. Real serious.

Today marks the 5th anniversary of the purchase of my first and only domain name. It’s been a sweet ride thus far, with over a dozen designs bedazzling the pages of Jaredigital.com. I’ve learned a lot by owning a domain and forcing myself to focus on change and new ideas. It used to be that no sooner had a new design gone live that I was already working on a new one. Those days are gone; but so that you may enjoy the history of Jaredigital, I have assembled a collection of screenshots that chronicle the questionably creative history of this lil’ ol’ piece of the web. Enjoy. 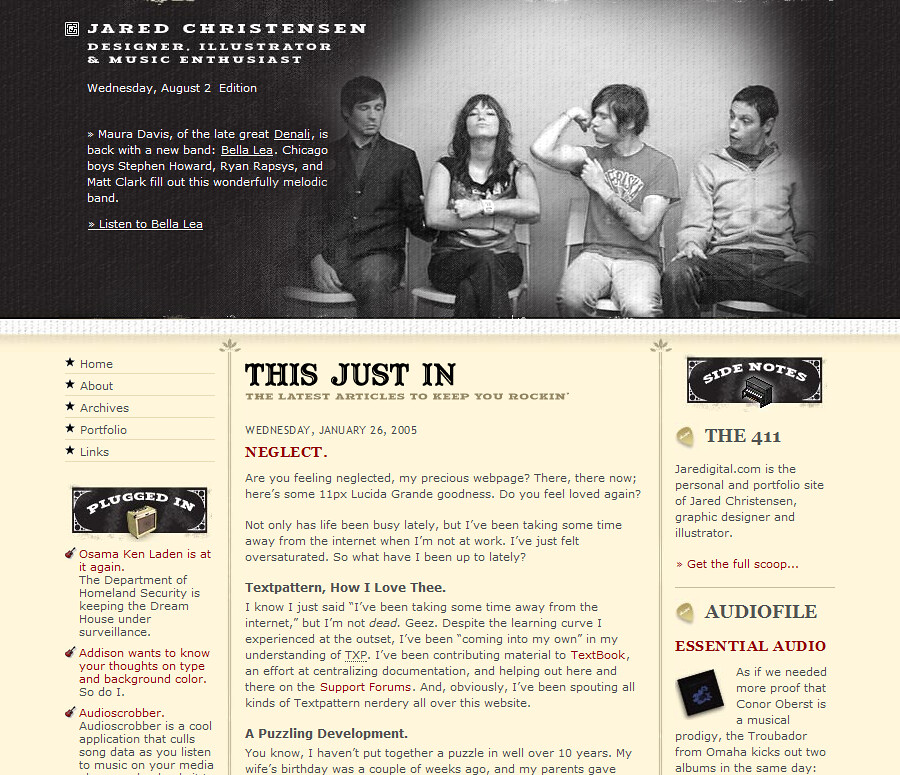 Sweet collection. Wish I had an archive of mine like this. BTW, isn’t this missing the design just previous to this one?

Not sure if this is relevant to your post, but my wife (then-girlfriend) and I were at the most boring New Years party back in 1999.

So tedious was the party that, on the strike of midnight, Lisa and I were the first customers of Esperranto’s kebab shop on Belfast’s Lisburn Road before heading to a more exciting venue – home.

Your version 11 link is wrong – it’s linking to the CSS Vault, which is displaying the pink version of your site.

Jeff – Shhh! ;) Heh, I’m actually a terrible archiver. I’m waiting for Archive.org to stop being retarded and redisplay my cache so I can put my last 2 screenshots up.

Paul – Thanks! Link fixed (but it still goes to the Vault… archived screenshot coming soon!).

Wow, you sure do keep busy with redesigns. As if that wasn’t impressive by itself, you’ve even added to that a vast portfolio! Thanks for being a leader by example in web standards.

Maybe pink and black (which looks hot, by the way) is the next phase? :o

A dozen designs already? And great ones at that. I feel so jealous.

I miss skippy. You should bring him back from the… junkyard. Ahhh yes, the good ole’ dream.in.code days ;)